So… a few weeks ago, Aaron’s aunty and cousin asked if I would give them a little guidance on decorating for Elyse’s (said cousin) high school graduation party.

I don’t think they knew what they were getting into…. asking me….

I LOVE parties and decorating and all of it. So, I think I scared them a bit, but we had lots of fun.

Anyway. Elyse had been collecting ideas off of pinterest.  And she wanted this one idea where you use book pages to make table runners. So we started there. And had to sacrifice some books (sad, but they went to good use).  And she made these awesome rosettes that we tried to incorporate where we could.  (She showed me one and I gave her homework to make about a million more.)

That’s Elyse. Isn’t she beautiful? And she’s standing next to the desserts.  We used the same book idea and a stash of that First Edition DSP that I nearly had to trade my first born for….to make the pennants.  The colors used were strawberry slush, costal cabana, wisteria wonder, and daffodil delight.

Diploma display. If you look close you can see the table runner. We made scallop edges out of card stock and the tasteful trim die to add color. 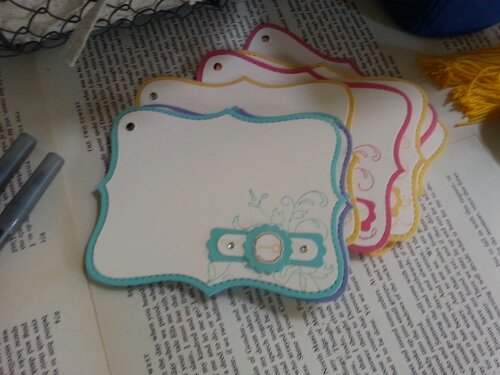 Instead of a guest book we had people sign these cards…and write a “key to success”.  Notice the little key??  I punched a hole in the corner to put them on a book ring.  These will be great for her to read while she is away at school… 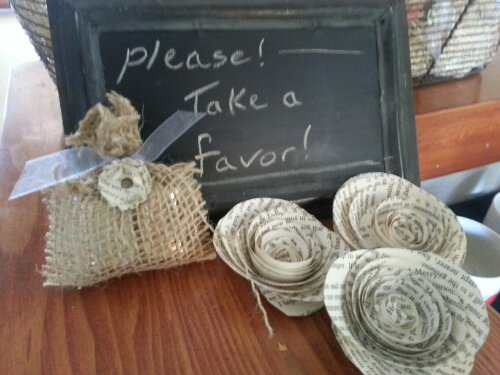 These are those rosettes she made. I have no idea how. But that little burlapy thing is the favor. A remake of my convention burlapy thingy. Only hers has 2 nuggets.

Oh yeah… it was a tea! I shoulda led with that.  Anyway… we used decorated mason jars for stuff we needed contained. Like cutlery.

And cause we had extra pennants, burlap, and jars…. we made some jars of pennants! Cause everyone loves festive pennants.  Filled the jar with heavy stuff and covered it with brown crinkle paper. 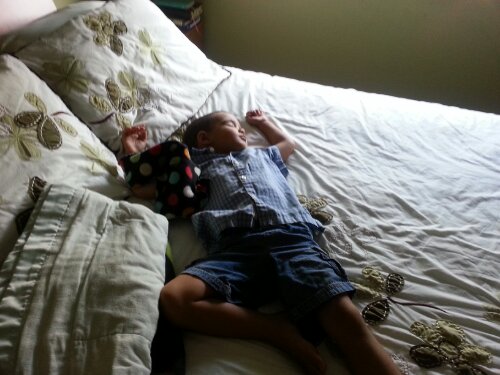 And all the festivity made Isaac tired. We couldn’t find him at one point and got to looking for him and found him passed out on Elyse’s bed.

Anyway. These congratulations are way late and Elyse has already started classes at Oklahoma Baptist University.  (My and Aaron’s alma mater) I’m excited to see what is in store for her and how God will use her! Its exciting to know that she is there with my little sister.  I’m not sure Bison Hill is gonna know what hit it…