So.  Those of you that know me know I was born and raised in the mid-west.  Kansas to be exact.  THE FARTHEST PLACE ONE CAN GET FROM AN  OCEAN IN OUR COUNTRY.  Seriously.  So, when this stamp set, By the Tide, was selected, I had a miniature panic attack.  Cause what the heck do I do with a lobster.  I have no idea how to eat them, prepare them, or even how to ORDER them.  I’m not even sure I’ve had lobster… probably have, especially at some buffet or something like that, but I don’t recall…..  And, until I moved to Hawaii and actually had REAL fish, I thought I hated all seafood (cause all I had to compare it to was catfish…which, if you like catfish, my apologies for the offense.  I, however, do not like it.  not one bit.)

ANYWAY, so I had to do something with a lobster.  I realize there are other stamps in this set, but I had to make it a personal goal of mine to make something with a lobster.  LOBSTER.  WHAT DO YOU DO WITH A LOBSTER?????  Looking at my favorite inspiration sites (aka pinterest) I found lots of New-England Coastal scene.  Which was really nice… BUT, I am also unfamiliar with that TOO.  Remember.  Kansas.  Not New England.

So, I made it a point to do something unexpected with a lobster.  And, my first thought was to pair it with melon mambo.  Cause I didn’t see ANY of that color on the pinterest search.  And, this is what I came up with. 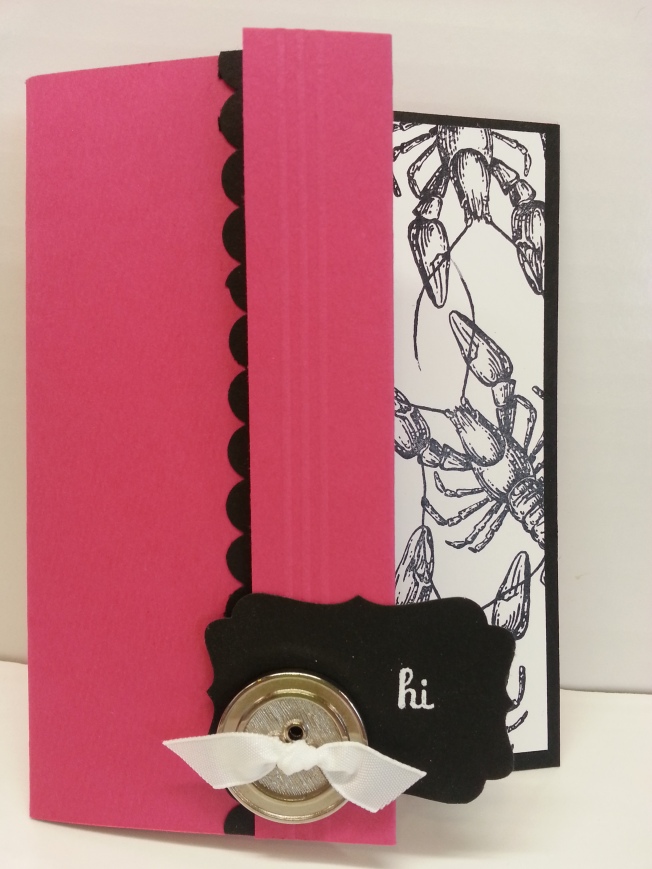 An IN YOUR FACE PINK AND BLACK (melon mambo and basic black) card with LOBSTERS.  Cause you wanna make a statement.  Send this card and I guarantee you will get a phone call… asking what do the lobsters mean?  So, here’s your chance to come up with something  REALLY funny.  Or just simply say, “they were to get you to call!!!”  Cause what do you do with a LOBSTER.  (I’ve polled several people, and the only answer I got was to EAT it.  Hum… )

So, here are some details on how to make the card.  The card base is made from melon mambo.  I cut basic black and whisper white panels to go on the inside.  Then folded a portion of the melon mambo front over.  I think I trimmed off about 1/2″ inch too, just to make it a little smaller.  Can you see the 3 scored lines?  Stampin’ Score.  Makes it SUPER easy to do neat scoring texture.  I added a scallop trim border.  Those buttons… those are the silver Basic Designer Buttons (item 129325 for $5.95) from the Spring Occasions Catalog.  I love those buttons.  And, you only have till May 31 to get them….  (or anything else in the Spring Occasions catalog you might want)  I added a little of the taffeta white ribbon on the button, embossed the word HI (from Fabulous Phrases set, 120501) onto the curly label punch.  And, that it it.

This next card was a little easier… in the sense of making something with the other images from the stamp set.  And, despite my resolution to try and NOT tempt you with the new colors going to be released, I did not have the willpower to do so.  WHAT YOU ARE SEEING HERE ARE SOME OF THE NEW COLORS.  Aren’t you LOVING them?  And now mad at me for showing them to you and making you wait until June 1 to buy??

The card base for this was naturals ivory.  It has a very earthy feel.  And, then I used Pistachio Pudding as the pale green layer and Coastal Cabana as the brighter green that has the “Miss You” stamp.  And the seashell stamp.  Brown Sugar ink was used for the wording stamps and crumb cake for the seaweed plant.  Those spots… that was a stamp from the My Paper Pumpkin Welcome Kit.  Which is marvelous.

Can you see the texture on this?  I used that canvas creations paper.  (item 129375)  Which is really not paper.  It’s kind-of a cross between paper and canvas… but really more canvas.  Maybe it is.   Who knows.  It doesn’t have the rigidity of paper… when you take it out of the package it definitely flops about.  But, it can be easily cut on the trimmer.  And, I love it cause you can fray the edges… just pull out some of the fibers.  There seem to be two different surfaces…one definitely has more texture than the other.  I used the more texture one.  I love it…gives a very earthy feel (I’m using that term for lack of a better word….)  I don’t FEEL very well right now, some cold that’s been going around.  Which I’m sure is why I’m having a more difficult time than normal figuring out something appropriate to do with lobsters…and figuring out the correct vocabulary to use for describing what I am trying to say…

I love the new colors, both the in-colors and the color refresh SU is doing.  It will definitely be lots of fun creating new things with these new products.

I think I win the prize for having the two most miss-matched cards from the same stamp set.  But, I did that on purpose (snort…).  Shows VERSATILITY.  And, I wouldn’t be anything if I weren’t versatile.     I don’t even know what I am saying.  Methinks it is time for more medication and an nap…..

Enjoy your next stop on the tour.  You’re off to see what Deb Leigh has for  you.  Click on the button below… or if that doesn’t work, there is a list…